As at 2019, the population of Indian seafarers is at 234,886. This is an increase of 26,087 from 2018. India to date is one of the major suppliers of seafarers, amongst China, the Philippines, Indonesia, the Russian Federation and Ukraine. However, the world remains in need of seafarers – a job that is not for the faint hearted.

Deliberate labour gap
Statistics from International Chamber of Shipping revealed the global demand for seafarers is estimated at 1,545,000, with the industry requiring approximately 790,500 officers and 754,500 ratings. This reflects that the demand for officers increased by around 24.1 per cent, while the demand for ratings has increased by about 1 per cent. The current supply-demand situation highlights a shortage of approximately 16,500 officers and a surplus of around 119,000 ratings.

The pertinent labour shortage warrants more efforts to entice people to join the industry. Unfortunately, the abhorrent overlook of seafarers’ welfare did the opposite. India today is the biggest casualty of the pandemic. To date, its number of infections has passed 23 million. Many nations have slammed borders shut towards India for fear of being the next to implode.

On vaccinations alone, the standard practice is two doses. The nature of seafarers’ jobs does not allow this luxury. Hence, single dose is the preferred approach. Unfortunately, availability is a major obstacle. Recently, the InterManager, an international trade association for the ship management industry expressed outrage at governments’ inaction to extend COVID-19 vaccination to seafarers. With the pandemic’s aggressive outbreak in progress, the demonstrated degree of apathy by shutting borders is a stark reflection of the extent of downplaying seafarers’ welfare.

The fear of contracting the disease holds seafarers back from returning to the industry, and aspiring ones from joining, while others decide against the idea for fear of crew change crisis. Activists’ strong advocating for attention towards seafarers’ welfare did minimal to effect any positive change. From a macro perspective, the world at large contributed to this labour shortage through conscious decisions masked as protecting their economies. Hence, was the labour gap “deliberately created”?

Seafarers are economy moderators
From vaccinations to crew change, countries unfortunately place their interests first – conveniently dismissing the seafarers’ sacrifices to sustain the world supply chain. It is a fair view to consider them as supply and demand, or even price moderators. By successfully meeting delivery deadlines, there are no shortages to worry about, much less inflation.

However, at a crucial time like now, it is only reasonable to consider seafarers’ benefits in reciprocal efforts to honour their commitment in keeping the world going. Recognising the need to designate them as key workers, granting vaccine provisions are initial steps. Hyping it without proper action amounts to nothing.

Just like any organisation, the team will sacrifice willingly if they know their employers have their backs in any situations. The crisis and labour shortage will continue as long as the collective failings persist. However, the tides can change if we view them from another perspective – not just sea couriers, but economic moderators. It is important to have the right talent, but giving them a reason to stay is most important. 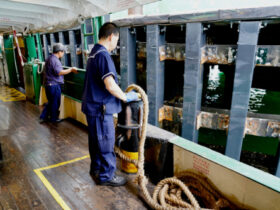 Newbuildings will hike demand for seafarers

Are seafarers’ contracts set in stone?

Newbuildings will hike demand for seafarers

Are seafarers’ contracts set in stone?