The safety of all seafarers is paramount, as the Black Sea region grows increasingly dangerous that even merchant ships are not spared

The pleas of International Maritime Organization (IMO) secretary-general Kitack Lim went unheard. In the early days of the Russia-Ukraine crisis, the secretary-general had asked for all parties, governmental and world leaders, to take action to protect seafarers, vessels and cargo. But two days into the conflict, Turkish-owned bulk carrier Yasa Jupiter, Moldova-flagged chemical tanker Millennial Spirit and Panama-flagged bulk carrier Namura Queen were hit by military forces, which led to majority of the vessels in the region scrambling to get out of the danger zone.

Heightened danger for seafarers
While some vessels were able to make their way out of the region, others were not so lucky. About a week ago, the Ukrainian government had reported that two Ukrainian-flagged bulk vessels Afina and Princess Nicole were hijacked by a Russian warship with about 50 seafarers on both vessels being detained. The vessels were carrying grain and are now anchored about 18 miles off the coast of Crimea, which is controlled by Russia.

More recently, there have been reports of seafarers being caught in the crossfire between the two sides. The Bangladesh-owned Banglar Samriddhi, which had been stuck at Olvia port in Ukraine since the start of the crisis, had been the unwilling victim of crossfire between Russian and Ukrainian troops and was hit by a missile. The hit led to the first confirmed seafarer death due to the crisis, and the other 28 seafarers on board had been rescued to a Olvia after the unfortunate incident.

Another vessel, an Estonian-owned freight vessel also sank near the port of Odessa in Ukraine after it sailed into a mine. There were six seafarers on board the vessel at the time, and were luckily rescued by Ukraine’s rescue service and taken to a hospital, but not after soaking in cold water for hours. Following the incoming reports, the North Atlantic Treaty Organization (NATO) put out a risk warning of the risk of mines for vessels in the region.

IMO secretary-general Lim repeated his plea for the safety of seafarers again, “Along with the people of Ukraine, innocent ships, seafarers and port workers engaged in legitimate trade should not be adversely impacted by this growing crisis. Shipping, particularly seafarers, cannot be collateral victims in a larger political and military crisis – they must be safe and secure.” 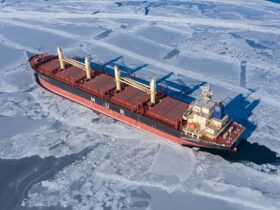